We are proud and honored to be associated with Dan Kenney. He is an established, reputed angler and promoter. Dan has worked with Twin Maple Outdoors filming a production of Small Mouth Bass Fishing on the Penobscot Water Shed in Northern Maine. Dan continues to work with Twin Maple Outdoors and many other fishing guides across the United States and Canada. If you would like more information on Dan, feel free to contact Us or Dan directly for all his latest adventures by clicking on the logo… 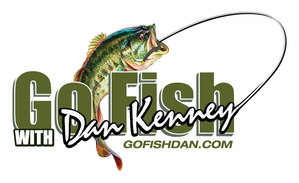 Dan is an avid angler and host of the television show “Go Fish with Dan Kenney.” The television program airs in 44 states as well as via the Charter network, taking viewers all over the U.S. and into Canada to both fresh and saltwater destinations. Through his program, Dan reveals and discusses useful and effective fishing techniques and products all while enjoying the great outdoors.
Background
Raised in Worcester, Massachusetts, Dan developed his passion for fishing at a young age. His father, while not a fisherman, enjoyed spending quality time in nature and brought Dan along with him on many adventures. His father recognized Dan’s interest in fishing and regularly took him out on the water. The rest, as they say, is history.
Dan’s career goals for his television show are honorable and modest: he hopes through watching his show, parents will be motivated to bring their kids out fishing much like Dan’s father did for him. It’s important to inspire the next generation of great outdoorsmen to respect, preserve and enjoy nature’s great outdoors.
Publicity and Recognition
Dan is recognized as one of Worcester’s more talented anglers. With more than 75 shows under his belt and a following on a national scale, it’s no surprise that he has developed relationships and filmed shows with renowned industry names such as Charlie Moore, Tony Bean, Ken Cook, Kevin Van Dam, Pete Gluszek, Henry Waszcuk, Real Andrews, Art Ferguson, Jess Caraballo, Art Berry and more. He has appeared in outdoor shows on NESN, ESPN, Fox and the Outdoor Channel and has also been featured in major fishing and outdoor magazines and newspapers such as Woods ‘n Water Magazine, The Northwoods Sporting Journal, B.A.S.S. Times, The Boston Globe, the Worcester Telegram & Gazette, and websites like the New England Sportsman Network; he has also received multiple invitations to do radio and television interviews to promote his show. Throughout the year, Dan appears at the Bass Pro Shops, Cabela’s, Klem’s and Rockingham Boat, and also participates in numerous outdoor shows such as the Big MOE (Massachusetts Outdoor Expo), expos and boat shows throughout New England and New York.
In addition to producing his own television show, Dan runs the New England Fishing & Outdoor Expo in Worcester, Massachusetts, which will run February 6-9, 2015. Known as one of the largest outdoor shows in the region, this attraction draws outdoorsmen and anglers from around the country. Dan’s extensive networking skills and abilities have helped kick this show off to a great start.
Charity and Non-Profit Partnerships
In light of the career Dan has worked so hard to establish, he is more than just a TV fishing celebrity. Dan is an active member of the community, dedicated to using his abilities to make a difference in the lives of others. Dan hosts events for various organizations such as Project New Hope, the New England Paralyzed Veterans of America (NEPVA) and Camp Joslin throughout the year.
Project New Hope exists to provide support to military veterans and their families after wartime service. With the help of other boat captains, Dan provides a fun and educational retreat experience out on the water where military families can fish and spend time with other families like themselves as a form of therapy.
The NEPVA strives to promote and deliver high-quality health care services to injured military veterans and also provideS recreation, employment, camaraderie and other opportunities for spinal cord injured and diseased veterans. Dan participates by organizing fishing tournaments for veterans where they can enjoy a weekend-long excursion out on a boat fishing with other veterans at no cost to them.
Camp Joslin is a Charlton-based camp that teaches children with diabetes how to face the challenges they will encounter in life in a fun, family-oriented atmosphere. Dan sponsors an annual ice fishing derby that benefits the camp. In the eleven years that he has been sponsoring this event, Dan attracted such a large number of participants that he was forced to relocate the event from Leicester’s Sargent Pond to Long Pond in Rutland. The derby has effectively raised $85,000 for Camp Joslin.
Dan prides himself on making it a priority to ensure that everyone who comes to these events leaves with an amazing prize as a reward for their participation and support.
Experience and Sponsorship
Part of what has helped Dan launch his own fishing career is his seasoned expertise as a marketing professional. He maintains an impressive list of prior experience in the marketing industry and has the skills and reputation necessary to increase awareness for any brand or sponsor.
Dan’s generous sponsors are what make his career a reality; they not only fund his dream but also supply him with the prizes he gives out to those who contribute to causes like Project New Hope, Camp Joslin and the NEPVA.